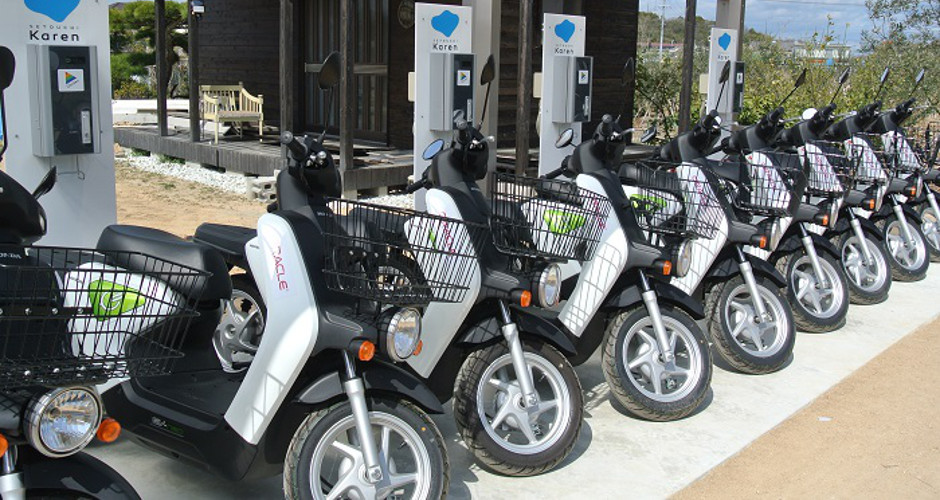 The small, quiet island of Teshima in Japan’s Inland Sea has been admired as a place of beauty, serenity, and a virtually untouched rural landscape. Now, it’s also becoming well known for cutting-edge art and technology.

The island has become the proving ground for a new business model for energy distribution as well as remote analytics and telemetry, used to ensure that tourists visiting a popular international art festival don’t get stranded on the remote island.

Teshima is ideal for day trips—but art exhibits are spread around the island, and public transportation is limited. SoftBank, the Japanese telecommunications and technology company, and PS Solutions, a subsidiary of SoftBank, this year launched an eco-friendly electric motorcycle sharing service called SETOUCHI KAREN. The service lets visitors rent Honda EV-neo scooters for a flat half- or full-day fee to get around the island easily. But these are no ordinary scooters—they are completely electric, rechargeable, and connected to the Internet of Things.

“This year, Teshima became not only an exciting destination for contemporary art, but also the test case for technological innovation that could transform the way people consume energy and travel,” says Norio Yamaguchi, director of the Cyber Physical System Business Promotion Office at PS Solutions.

Yamaguchi and his team wanted to develop a model for how various energy providers (in some cases, private citizens) can set and adjust rates based on user needs. That model found an application in Ubiden, a smart-grid transaction engine that can adjust the cost of the energy based on the use of the appliance plugged into the system.

“Mobile phone companies charge different rates depending on who made a call to whom,” says Yamaguchi. “Energy, I thought, should be the same. For example, if it’s used for electronic vehicles, you would have a different fee for that type of power, versus the power needed to activate a television or a hair dryer.”

Yamaguchi hopes to extend the program to local home and business owners, so they can provide their electric power to scooter drivers looking for a recharge. Ubiden would serve as a broker for the transaction, providing a point-of-sale system that measures and charges a rate for the power used.

“Electricity is everywhere. There is the owner of the location who is willing to let someone use their power, and there’s a passerby who wants to use that power,” says Yamaguchi. “We want to make energy easier to use.”

The electric scooters run approximately 30 kilometers before they need a 20-minute recharge, so Teshima’s small size made the island a perfect location for the pilot. The plan was environmentally friendly, more economical than building gas stations on the island to fuel gas-powered scooters, and a great mechanism for art enthusiasts to get around.

However, if visitors get stuck on the island, they’re in trouble. Ferries run only a few times a day, and lodging is very limited. So scooter riders needed to receive an alert if they were running out of charge, so they wouldn’t find themselves stranded in a remote part of the island. “We needed to monitor the scooters from a remote location, and integrate the monitoring system with our electric-charging system,” says Yamaguchi. “We also wanted to gather data about the sharing service so that we can expand it to other places.”

To get all of this done, Yamaguchi’s team needed an Internet of Things platform that would connect the scooters to a central system that collected, displayed, and analyzed driving data, location information, and power consumption in real time. “We found out that the Oracle IoT Cloud platform is the right choice,” says Yamaguchi. “It integrates the information we need, and is the only IoT solution we looked at that provides predictive analytics as well.”

The IoT system’s two-way communications technology connects with the scooters every few seconds to gather information on their location and battery usage. If the battery is running low, the operator will receive an alert from the system automatically. The system will also send warning if they are in danger of missing their departing ferry.

The scooters put the predictive functionality of the Oracle IoT Cloud to use in a unique way. Some riders brake frequently, requiring the scooter to use more energy to regain speed and causing the battery to discharge at a faster rate. Oracle IoT Cloud identifies the scooters that are being operated in this manner and flags the riders who may have difficulty getting back to the ferry on time.

Ultimately, SoftBank would like to expand this startup—a “bonsai model” according to Yamaguchi—to other locations. He believes that the system can have a significant positive impact in areas where pollution is a risk, and where building a formal infrastructure to charge the EVs is cost-prohibitive.

“We are looking at India, the Philippines, and Cambodia,” says Yamaguchi. “There are some sightseeing areas in those countries that see millions of tourists a year, so it’s highly likely our next challenge is going to be such an area. We want to introduce a high-quality, low-price service there that is also IoT-enabled.”