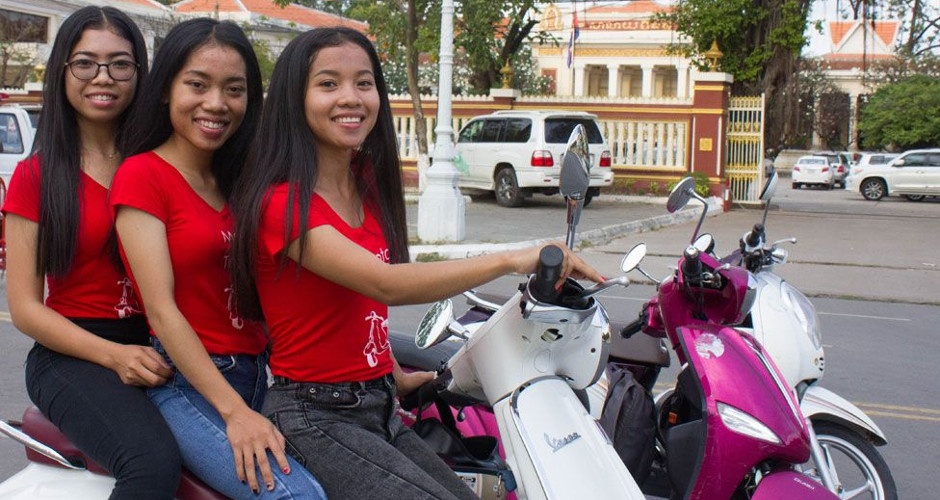 In Cambodia’s capital, motorbike taxis are everywhere – but it’s extremely rare to see women drivers transporting tourists. Those who do are judged harshly. Katya Cengel meets the young entrepreneur trying to change that.

When they show up at a Phnom Penh hotel in their tight red T-shirts and skinny jeans, people tend to get the wrong idea about Renou Chea and her fellow Moto Girl Tour guides.

It is an important distinction to make in Cambodia, where women who associate with foreigners are often assumed to be “bad girls” – or women who work in the sex trade.

“Sometimes they think that when we hang out with the men, it’s just like for sex or something like that,” adds her sister, Raksmey Chea, 23.

Because they are all young and beautiful, Renou doesn’t understand why advertising this might seem strange.

Many women drive the little Vespa scooters and Hyundai motorbikes that zip around the city – everyone does – but they don’t usually carry tourists.

Renou got the idea after an aunt told her about schoolgirls offering a moto taxi service in Thailand.

Having ridden a motorbike since high school, and having studied English in college, Renou figured showing tourists around her city would be a fun way to earn money. Having also studied accounting, she no doubt saw a good business opportunity as well. In 2015 almost five million tourists travelled to Cambodia, according to the Cambodian Ministry of Tourism.

Renou recruited her younger sister and Sreynich Horm, 22 – both as petite and pretty as Renou – and occasionally a fourth woman to be Moto Girl Tour guides.

But before they took their first tourists on board their bikes in early 2016, they had to convince their families that they would be safe.

Horm’s father worried that a foreigner riding behind her could touch her and do other things to her – things “good” virgin girls should not have done to them.

To make sure they kept their reputations safe, the women established a rule – no holding on to the guide, hold the handlebar on the seat behind you instead.

When they have night tours and tours outside the city they team up. Still, friends and family often worry about the women carrying around large foreigners.

For years she has been helping her father with his grocery store by making deliveries on her Vespa. Plus, as a woman, she believes she is actually a safer driver, something Hong Ly, guest relations’ manager at Mito Hotel agrees with.

“Tourists like girls who drive slow, not weave in and out of traffic,” said Ly, who keeps a stack of Moto Girl Tour brochures on her desk.

The Moto Girls may be on to something. In early 2016 Vespa Adventures motorbike tour-company opened a branch in Phnom Penh and began hiring both male and female drivers, says Alex Meldrum, manager of the Phnom Penh branch.

Chanel Sinclair, a 31-year-old lawyer from Australia, was both thrilled and comforted to find female tour guides when travelling solo in Phnom Penh for the first time in spring 2016.

She was so pleased with the attentive service she received from the Moto Girls, including regular cold water deliveries and help with bartering, that she went on three tours with the group.

Renou would like to see more women travellers like Sinclair, but so far the majority of the company’s 50 or so customers have been male.

Scottish photographer Ross Kennedy, 44, took a custom tour with the Moto Girls in March 2016. To find more authentic scenes for Kennedy to shoot, Horm went to a region outside the city where her father has family and asked locals’ advice.

Kennedy’s tour began with crashing a wedding in the morning and ended with a Buddhist blessing ceremony in the afternoon. “Those are the memories that make a trip special,” Kennedy wrote in an email.

In addition to being female, the Moto Girls try to differentiate themselves as well-informed guides who can discuss Cambodian art, history and culture.

Finding the right spots are not the only challenges they face. There are the cultural differences as well, like the Indian customer who said “Yes” while shaking his head in a fashion Renou mistook for “No”, or the man from New Zealand who screamed when he saw a chicken on the road.

On one occasion Renou and her client were so absorbed in their tour of the National Museum that neither heard the alarm sounding the museum’s closing. Renou finally glanced at her watch at 17:30, half an hour after closing time. As they raced to the gate, her client promised to book another tour – if she could get them out of the museum.

The locked gate proved a dead end, but some workers were able to find a security guard who let them out. Renou’s customer proved true to his word and booked another tour.

Other difficulties are in the driving itself. Passengers unfamiliar with riding motorbikes sometimes lean to the left when they should lean right, says Horm.

Then there was the tourist who got the wrong idea and asked her out on a date. She turned him down, not wanting to confuse her work with her social life. Plus, she didn’t fancy him.