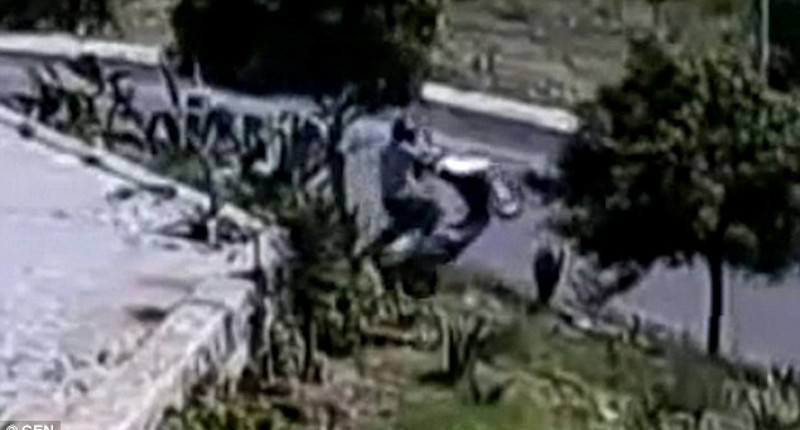 This is the incredibly embarrassing moment a French tourist lost control of his scooter and accidentally accelerated off a hill.

The humorous clip was captured on CCTV in the Degirmenburnu region of Bodrum – a port city in the south-western Aegean Region of Turkey.

The man had reportedly been visiting the area – where many tourists take pictures of the beautiful scenery – with a friend and had decided to rent a scooter for the scenic tour.

The Frenchman, who has not been formerly identified, had parked his vehicle on a concrete platform atop a hill around 20ft above the road.

The footage shows the hapless biker moments after returning to his scooter and waiting for his friend to come back from taking photographs.

While wasting away the seconds he decides to rev the engine when he suddenly leans forward.

His movement results in the kickstand lifting up and his back wheel hits the ground, causing the scooter to begin accelerating forward.

Suddenly the tourist finds himself plummeting over the edge of the platform and down the hill towards the busy road below.

The footage shows him tumbling down the steep grassy slope and crash-landing before coming to a stop, inches away from moving cars.

According to reports, the friend who had been off taking photographs came to the rescue of the man and helped him recover his scooter.

The man did not receive any injuries from his bizarre crash, although he may have bruised his ego.