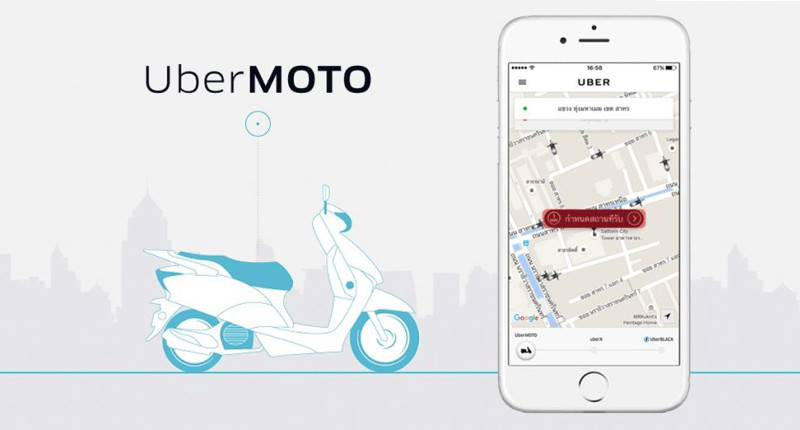 Uber has launched a motorbike service in Thailand, marking the first time that the company has offered rides on two-wheeled vehicles. The service, called UberMOTO, launches today as a pilot program in Bangkok. In a press release announcing the pilot, Uber said the new service is aimed at cities in emerging markets where traffic congestion is particularly severe.

Sadly, by the middle of May, things took a turn for the worse.

Ride-sharing service Uber has suspended its motorcycle taxi operation in Thailand following a ban issued by the Department of Land Transport (DLT) on Tuesday.

UberMoto was suspended as of noon Wednesday and its registered members have been informed, said Amy Kunrojpanya, a spokeswoman for Uber.

The DLT insisted UberMoto and GrabBike, both smartphone-based motorcycle taxi services, are illegal and were required to stop their operations or face stiff legal action. In response, GrabBike said Wednesday it is working with the government, but has not specified how it will proceed with its service.

As one female driver explained it in her article, My short-lived experience as an uberMOTO driver, innovation once again lost out to regulation.

On 18th May, I received a long SMS from Uber stating that they were ending uberMOTO due to some regulatory problem with the government.  For a short time, I made a lot of money. Uber gave me incentives just for being online, whether I was getting riders or not. I wish our government could be half as innovative as we startup folks are.

As it turns out, the Thai army is directly involved in the motorcycle taxi business, and this has led to all manner of problems.

Does taxiing people around on a scooter all day sound like a fun job to you? Maybe it could become a reality in more places if governments would simply get out of the way of innovative startups and budding entrepreneurs.